In spite of a groundswell of public opinion, spurred by the non-partisan fairdebates.ca petition, the TV broadcasting Consortium refused to allow Green Party of Ontario Leader Mike Schreiner into the televised Ontario Leader Debates.

Both Liberal Leader Premier Kathleen Wynne and NDP Leader Andrea Horwath expressed public support for Mike’s inclusion.  The double barrelled argument was that not only does the Green Party of Ontario field candidates in every riding across the province, the GPO exceeded the 2% Elections Ontario threshold (earning nearly 5% of the vote).

Alas, the unaccountable Broadcast Consortium refused to bow to public opinion and excluded him anyway.  Silent Protestors gathered outside the CityTV studios to protest the first Leaders Debate excluding Mike Schreiner, but after a few quick glimpses from the early live feed, efforts to keep Green protes         news camera folk

Locally CBCKW rigorously supported the Consortium’s GPO censorship by refusing to allow local Green candidates to be included in its riding specific local broadcast, unless one of the “big 3” candidates declined to attend. Stacey was invited to the Kitchener Centre broadcast, but was explicitly informed she had only been included because they only had 3 microphones, and PC candidate Mary Henein Thorn declined.  Zdravko was excluded on Tuesday, Bob on Wednesday.  Mr Norris neglected to inform his listeners he was excluding our candidates, so at the CNIB’s ReVision All Candidate’s Meeting, someone asked why Bob decided not to appear on CBC.  It’s bad enough excluding us, but making it look as though some of our candidates chose not to show up is much worse.

But we have received some coverage.  The Toronto Star Editorial Board endorsed Mike Schreiner for Guelph MPP. and hosted a video Q&A with the Green Party Leader.

The Agenda has given the GPO some excellent coverage as well, inviting our shadow cabinet members to participate, as well as analyzing the GPO Platform.

May 25
Analyzing The Green Party Platform

May 25
The Green Party Leader

The biggest problem faced by Greens isn’t coming up with great policy, it’s getting it out there so people know about it.  That is why this is such an important issue.

In spite of everything, I am convinced Ontario is going to join the Green Wave and send Mike Schreiner along with a healthy complement of Green MPPs to Queen’s Park.  Like an opinion poll, that’s just a guess, but what I’m seeing and hearing suggests this will come to pass.  Even in our Kitchener-Conestoga riding, a traditional Conservative stronghold, the turmoil within the PC Party could very well provide an opportunity in what should have been a safe seat.  With the added bonus of the Liberal leader’s concession, our chances are even better.

What we do know for sure is that the addition of even a single Green voice in the legislature will be a game changer.  And that can only be a good thing; not just for Greens, but for Ontarians.  More and more people are starting to realize there is another choice.  It really is time to start doing politics differently.  If you haven’t yet voted, tomorrow ~ June 7th, 2018 ~ is the day.

As GPO candidate Andrew West says, |
“If everyone…who ever thought about voting Green DID vote Green. we would win!”
~ @greenAndrewWest

[Reprinted from the WRGreens Blog]

The Ontario Election was called on Wednesday May 9th, 2018.   The WRGreens invited Green Party Leader Mike Shreiner to join in our campaign launch

The WRGreens are again setting up a shared campaign office; this time at 6 Duke Street in Kitchener.  We’ll announce our opening in another blog article. But with the election on, we’re all spread pretty thin.  Tonight all the candidates from the Liberal, PC, NDP and Green Parties were invited to an education Q & A event to speak to teachers.   Sadly none of the PC candidates chose to attend. I hope to start posting video tomorrow tomorrow.

Since our Cambridge candidate Michele Braniff was unable to attend, Green Party of Ontario Leader Mike Schreiner pitched in.  (Just one of the many things that makes him a great leader!) 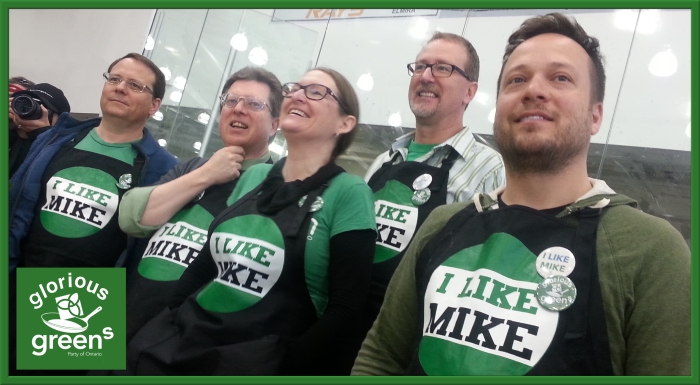 After watching the other teams compete on the obstacle course, Mike used scientific methods to determine which team member should play which position.

But things didn’t actually work out as planned.

The Glorious Greens made it through two rounds before being disqualified; not bad for our first time out (and valuable experience for next time!)

In between times we got to meet interesting people. 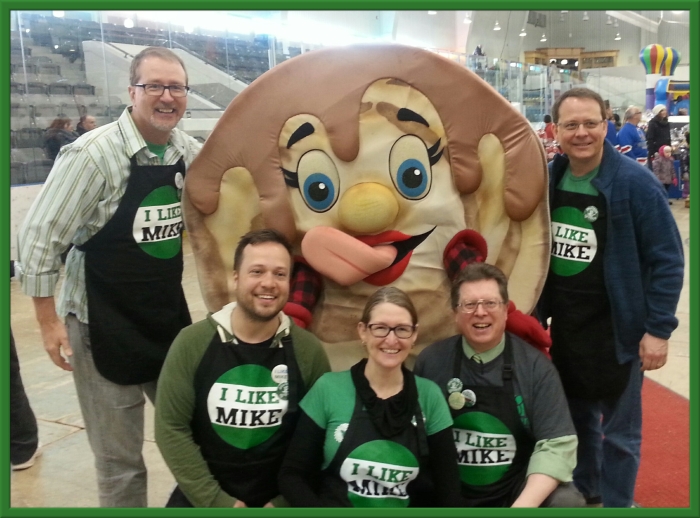 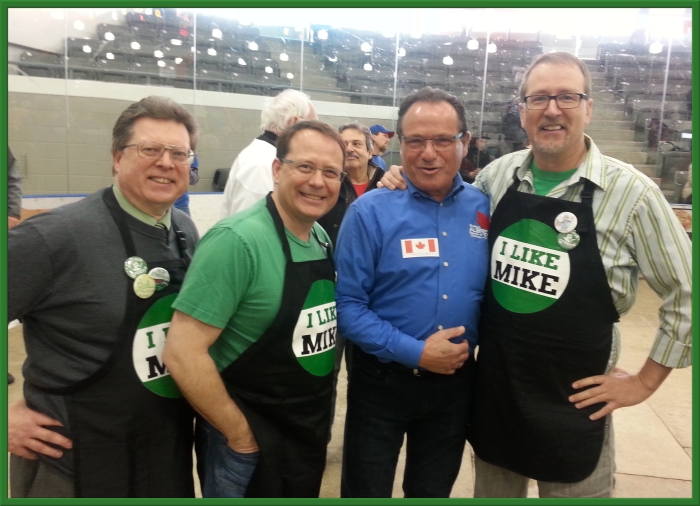 We had an information booth set up inside the Woolwich Memorial Centre. 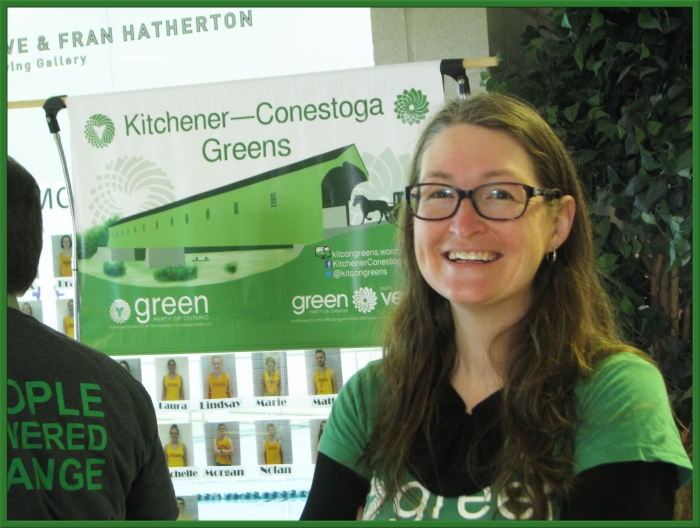 Alongside our button making event…

…where kids of all ages…

…could make their own button…

while being serenaded with live music!

Our first outing at the Elmira Maple Syrup Festival was a great success.

What a glorious day!  We hope to see you there next year!

There’s a provincial election coming in June, and the Kitchener–Conestoga Greens are starting to gear up.

Along with the other Waterloo Region Green Party riding associations, we’re having an election planning meeting this Thursday:

Everyone is welcome to come, not only Green Party members. Bring a friend, and meet the candidates for Waterloo, Zdravko Gunjevic, and Kitchener Centre, Stacey Danckert. We’ll talk about campaign strategies for Waterloo Region, and the Green Party of Ontario’s priorities

If you’re hearing about this for the first time, my apologies for the short notice. We’re just getting started with mailouts for KitCon Green Party members, so future events will get much more advance notice.

We’ll elect new executive for the upcoming year. Positions to be filled are:

The AGM is at 7:00pm, but please join us for dinner at 6:00pm, and feel free to stay and chat about politics over a beverage until closing. Have a look at Kennedy’s menu!

The AGM also marks the closing day for candidate nominations for the Provincial Election. If you’d like to run, please contact Maureen Balsillie, Organizer for the Green Party of Ontario at maureenbalsillie@gpo.ca or +1–519–400–1437

The Kitchener–Conestoga Nomination Contest will be held in early April to select our candidate for the June provincial election.

Hope to see you at a Green Party event soon! 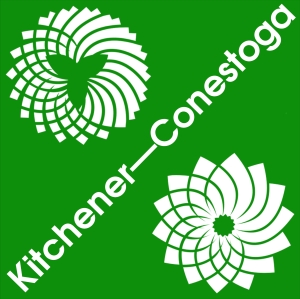